In case you are following me on Instagram, you may have noticed that it has been a bit quiet over the past couple of days. Well, there is a good reason for it: unfortunately, I had to undergo surgery due to an umbilical hernia. It is a small left-over from that immense belly I had during the triplet pregnancy. Since I am not allowed to lift the children for three to six (!) weeks – which seems impossible by the way – I thought this would be a great opportunity to start writing my blog. Ohh Yeahh! (this is me trying to stay positive…)

Whenever I tell people about our family ‘composition’ (I like to see it as a piece of art), I receive the craziest responses. I will be compiling those in a soon-to-be-posted story, but for now, I thought to share with you my mother’s response to the news of us expecting triplets, which I believe is priceless. Yes, mom, I’m sorry but your response was totally crazy!

Let me take you back to November 2015, when I had my first sonograph.

Jorn and I had dropped off the twins at my parent’s place – who also happen to be our neighbors – before going to the hospital for the first sonograph. We were obviously anxious to find out what was going on, and were also slightly nervous because I hadn’t been feeling well at all. Well, within 30 minutes after dropping off the kids, Jorn and I received the incredible news of me carrying triplets. This was obviously an amazing moment, that I will be telling you more about some other time.

After some laughter, some serious conversations and pinching each other a few times, Jorn and I went back to my mom to tell her the good news. At least to us this was good news; we were excited and very happy. My mom, however, had quite an interesting response…

I came into the kitchen, looked at my mom and told her she would best sit down first. She refused, which is my mom at her core – and said: “Manon, just tell me, is everything okay?” and I said: “yes, everything is more than okay” and I started smiling. She said: “Oh no! No, no, no, another set of twins? No Manon, is it another set of twins?” I said: “No, of course not, not twins, haha… Not twins, just triplets!!!”

Haha, I’m laughing out loud while writing this down because her response was totally insane! My mom continued: “No, it’s not true, this can’t be true”. She raised her voice and started panicking. “MANON IT IS JUST NOT POSSIBLE, how are WE going to handle this?” (I especially like the “WE” part in this). She called up my dad – very agitated by the way, as if there was someone in the room to blame for this – and the only thing she said was: “Yes, everything is okay, yes, she’s fine… There are three, three babies!” and she hung up. I can only imagine how confused my dad must have been after this bizarre phonecall.

So, after drinking a cup of tea and me showing my mother the sonograph (see picture), Jorn went back to work and I took the twins home. My mom didn’t talk about the pregnancy for two weeks straight. She was in complete denial. She didn’t ask how I was feeling, didn’t ask about our doctor’s appointment, she just continued her daily life pretending that nothing had happened. I thought it was a rather strange way of acting but I also found it hilarious. I know it was just because she was so worried about me and – to be fair – there were good reasons to be worried. Eventually, she recovered from her stress (to some extent) and proved to be a great support during the remaining part of the pregnancy, and she still is today! 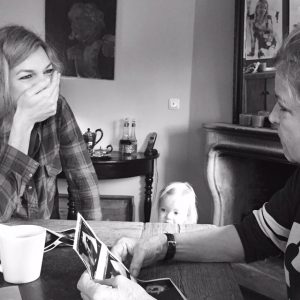